Whilst undoubtedly the biggest upset this weekend was down in Brighton, where Japan toppled South Africa, there was another big result in the first round of games at this years RWC. In the small city of Gloucester, another result has big implications on Group C and future world cup qualification.

It wasn’t an attacking display that caught the eye of spectators at Kingsholm, however. It was defense that reigned supreme.

With only 17% territory and 16% possession in the 2nd half, it’s amazing how Georgia managed to only concede one try. They made the most tackles of any team in the 1st round, and also had the 2nd highest tackle success percentage, making 92.6% of their tackles. 3 of their players also topped the tackle charts for the week: 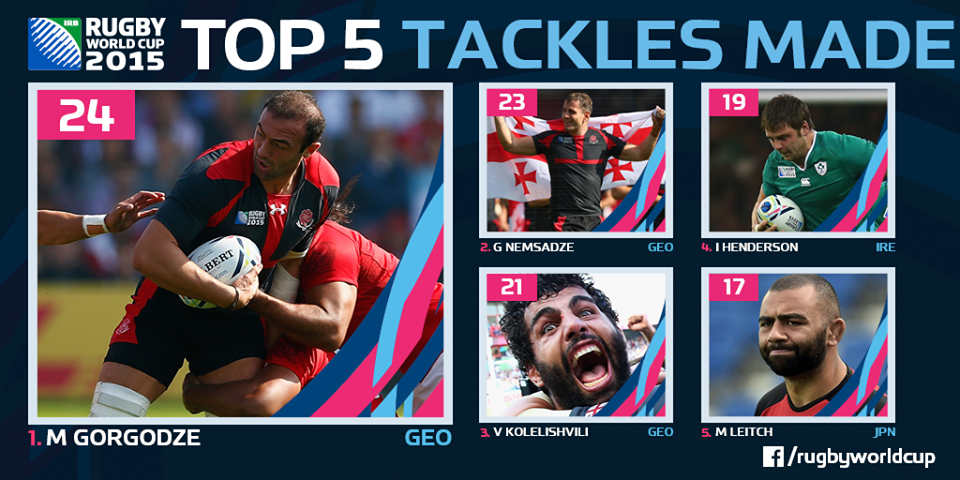 Outside centre Merab Sharikadze also made 15 tackles – the most of any back player in the opening round.

The victory was hard earned. Man of the Match and Georgia captain Mamuka Gorgodze said in his post-match interview that “the game was the toughest I’ve played in my life”. This was a different type of game to the upset down in by the seaside at Brighton, but was just as good a performance by Georgia for many reasons.

Here at Linebreak, we decided to look at the Georgian’s herculean effort in the second half to withstand the barrage of attacks from Tonga, and how their defense managed to hold off such a relentless attack.

I’m pretty sure Georgia’s head coach Milton Haig’s half time speech included “get in their faces, and put in a big hit”, because that is exactly what happens almost immediately after the start of the second half:

In 4 phases, the Georgian’s have pushed back Tonga just over 10 meters, impressive defense. Their line-speed all day was fantastic, moving quickly up as soon as the ball was released. The first man puts in the big hit, and the second man pushes him back. The Tongans – perhaps stunned by their oppositions aggression – are slow to support, and as a consequence get driven back almost every time.

Example 2 of Georgian tackling, the flanker Tkhilaishvili decides to act as a speed bump for a Tongan….

…and gets up as if it was nothing.

The hooker Jaba Bregvadze causes the turnover, and scrumhalf Vasil Lobzhanidze is able to put in an excellent kick into the corner, and gives Georgia some much needed respite from the Tongan attack.

The defense never gave up – and they made 201 tackles in the game – an incredible amount. You could see by the end of the game that almost all of the players were burnt out, but they still kept going. They picked their moments to strike, and they always went into a tackle with 2 – 3 men going after the ball carrier. This nullified Tonga’s offload game, and limited them to only 11 offloads.

Tongan mistakes were duly dealt with and punished by the Georgian team. Here – Kurt Morath misses touch on a Tongan penalty, and the Georgian fullback puts in a huge kick to put the pressure back onto Tonga:

I think I was screaming at the TV when I saw this, look how many Georgian players there are in between the 15m line and the touchline. I count at least 12 there, why did Tonga not spread it wide??  They persevered with the same route one style of bashing it up the middle, and to no avail. Now I don’t want to sit here and downplay Georgia’s performance at all as they played very well, but Tonga offered little in attack and had no Plan B. Whenever they tried to chip it through or to pass the ball wide they had success, and you wonder why they didn’t do this more. Instead they went route 1 and played straight into the Georgians hands.

Looks alright on the surface, doesn’t it? However the stats don’t tell the full story of the Tongan lineout on Saturday. They were unable to get clean ball out to their backs from lineouts – often disrupted by the impact of the counter ruck, or a Georgian player was able to get his hands on the ball because of poor Tongan ball protection. Here circled we see Georgian number 5, Mitukadze getting his hands on the ball – as a result of poor protection from the Tongans – and disrupt to force a turnover from the maul. A great result, especially in that area of the pitch:

And who’s in there spoiling possession later on in the game again?

The Toulon lock had a fantastic game (although he definitely wasn’t the only one) and was a constant thorn in the Tongan sides, slowing down the ball and disrupting the Tongan lineout for most of the match.

The crème de la crème of Georgia’s game, the scrum. The entire front row plays in the French Top14, a more competitive domestic league than most of the Georgians play in, and it really shows. The Clermont and Montpellier props Nariashvili and Zirakashvili start off the game, and then the Brive and Toulon props Asieshvili and Chilachava are brought on just after the 60 minute mark. Fresh legged scrummagers who are arguably just as strong as the starters. The strength in depth in the frontrow that Georgia have is something most teams dream of, and towards the end of the game – wins them several kickable penalties (which aren’t converted unfortunately). The forwards were also able to close out the game in the 80th minute winning a penalty off a scrum inside their own 22m line.

The Georgians are able to win penalties with their scrum dominance, and its something that bigger teams will be wary of when playing Georgia.

Here’s an excellent piece by Daniel Schofield of the Telegraph if you want to read more about Georgians and what scrumming means to them.

For a majority of the last 20 minutes, Georgia were camped near their own line and for the last 8 minutes of which they had 14 men. Tonga tried everything: they went for more lineouts, driving mauls, and set plays to try and provide quick ball for their backs. However the Georgians were equal to this every time, and were able to slow down the ball. Allowing time for their defense to re-organise, regroup, and wait till Tonga made an error.

This next clip summarises Tonga’s attack for the last 20 minutes. In each phase they pass to a forward who crashes it up. The Georgian linespeed is fantastic, and prevents Tonga from gaining ground. Once again the Georgians are able to slow the ball down and re-organise their defense. Rinse. Repeat. Victory:

The whole team contributed to what was a fantastic defensive display to defeat Tonga. The defensive line was organised wonderfully by the captain, Gorgodze, and young scrum-half Vasil Lobzhanidze; who put in a spectacular performance and also became the youngest ever player in a Rugby World Cup.

Mitukadze caused havoc in the lineout for Tonga, and was constantly able to spoil quick ball for Tonga, and the scrum dealt with a lot of pressure towards the end of the game in particular, but was able to stand firm and win several key penalties for Georgia.

It wasn’t just about the forwards though. Whilst the set piece and pack defense was solid, some of the kicking out of hand by the fullback Kvirikashvili and the scrum-half Vasil Lobzhanidze was superb, and the defensive effort from the two centres was phenominal.

All told, the whole team deserved beer or two after the game:

With this result, a 3rd place finish and automatic qualification to the 2019 RWC in Japan is looking much more likely. It’s a great achievement, but Georgia should be wanting more. Their target in recent years has been to enter the Six Nations:

Milton Haig: “We feel we deserve our chance… If after two to three years we are not good enough, we will put our hands up and say, ‘OK we need to get back down.’ But give us two to three years and I am pretty confident we can be competitive.”

Will Georgia need more possession to beat bigger sides? Can they compete with the Tier 1 nations? We’ll get an idea of that on Friday, when they take on Argentina.

If you liked this article, check out the rest of our analysis pieces here.