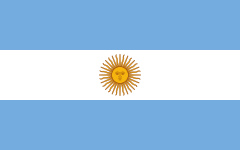 Road to Qualification: Qualified through position in RWC 2011.

Credit to The Great Rugby World

In recent tournaments Argentina have had a fairly good go at the Rugby World Cup, making the Quarters in ’99 and ’11 and unbelievably coming third in ’07. Argentina are one of those teams that thrive on the underdog label and always play well against big opposition even if the scoreline is a bit too one sided than what they’d hoped. Following the double hammering of France in 2007 to take the bronze, Argentina have since joined the Rugby championship meaning they play against South Africa, New Zealand and Australia every year.

There were questions as to whether this move would weaken the side or make them stronger and it seems a recent run of big scalps for Los Pumas has answered that question emphatically. In 2014 they won their first Rugby Championship match, against Australia at home. Not too long after they took their giant slaying form on the road and drop-goaled France to death in Paris before going over to South Africa in this years Rugby Championship and embarrassing the Springboks with a 37-25 win.

As for their chances in this World Cup, Argentina have been placed in a pool that with the exception of New Zealand, they should be able to climb out of fairly easily. Leaving the pool, Argentina would most likely find themselves against France or Ireland, either of whom they can beat on a good day. Could this be the year of the Puma?