Founded in 1866, both Harlequins and Wasps were first formed under the name Hampstead Football Club. In 1867, part of Hampstead FC flew the nest and went on to form Wasps FC, using the same colours as Hampstead FC, their famous black and gold kit.

In 1869, Hampstead FC held their annual meeting. Items on the agenda: a kit and name change. The club was starting expand at a fast rate, and membership was no longer just for local residents. At the same time however, they also wanted to keep the same ‘H F C’ monogram previously used. The club secretary brought out a dictionary, and began reading out the different H words in the dictionary. When he got to the word Harlequin, he was stopped, and all who were present at the meeting agreed that club was to be called Harlequin FC. After the name was decided, the club colours were picked, as they thought that the old gold and black colours were no long appropriate with the new name. They decided to use the quartered colour pattern on the shirt, the same as they use today.

Harlequins had a nomadic life to begin with, playing at 15 grounds before 1909. In 1906, Harlequins were invited to use Twickenham stadium as their home ground by the Rugby Football Union (RFU), and in 1909 made it their permanent home. 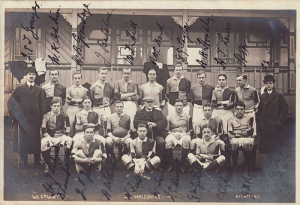 One of Harlequins’ most impressive performances in their early life was against the American Olympic team in 1924. The Americans were in Europe that year to defend their Olympic title at the games in Paris, and played Harlequins as a warm-up fixture. Harlequins ended up beating the American team 21 – 11.

They also managed to beat the New Zealand team 11 – 5, 2 years later. A black and white video clip of that game can be found here (and you get the bonus of seeing a 1926 New Zealand haka, win-win).

Whilst there were many positives to finally having their own place to call home, there were some drawbacks to playing at Twickenham. The size of the stadium meant that Harlequins were unable to fill the ground, which meant there was little to no atmosphere. In the 1963, Harlequins acquired 14 acres of land near Twickenham, which they developed into a training ground and a stadium, which was named the Stoop Memorial Ground, after one of Harlequins’ most famous players, Adrian Stoop. The club renamed the stadium in 2005 to the Twickenham Stoop, which it is known by today.

In 1987, the current league structure in England was put into place and Harlequins were placed into the premier division. They remained there until 2005, when they were relegated. They immediately bounced back, and came back stronger than ever before.

Harlequins however, were also unfortunately involved in the incident which was dubbed ‘Bloodgate’  in 2009, in a Heineken Cup quarter-final match against Leinster. One of the Harlequins’ players, Tom Williams under orders from the Director of Rugby at the time, Dean Richards (now at Newcastle Falcons), faked a bloody injury so that he was able to be substituted for Nick Evans, their goal kicker. A video with more information on the incident can be found below.

Harlequins’ reputation was significantly damaged from ‘Bloodgate’. They sacked 3 top officials, including Dean Richards. Harlequins’ needed to bring the club back into a positive light. Step forward, Conor O’Shea. As the new Director of Rugby, the ex Ireland international looked to bring in cultural changes to the club, and restore their reputation.

Nick Evans speaking to Daily Express: It [Bloodgate] is a tattoo with the club that will always be there. We’re not shying away from the fact that it did happen and we still have a players from that day, but the whole team have moved on with Conor O’Shea coming in. The season after that game was brutal but no-one jumped ship and we take so much pride in where we have come from.”

Harlequins bounced back from the ‘Bloodgate’ incident, and went on to win the Amlin Cup in 2011, and followed that up by winning the premiership title in 2012. Things were beginning to look up.